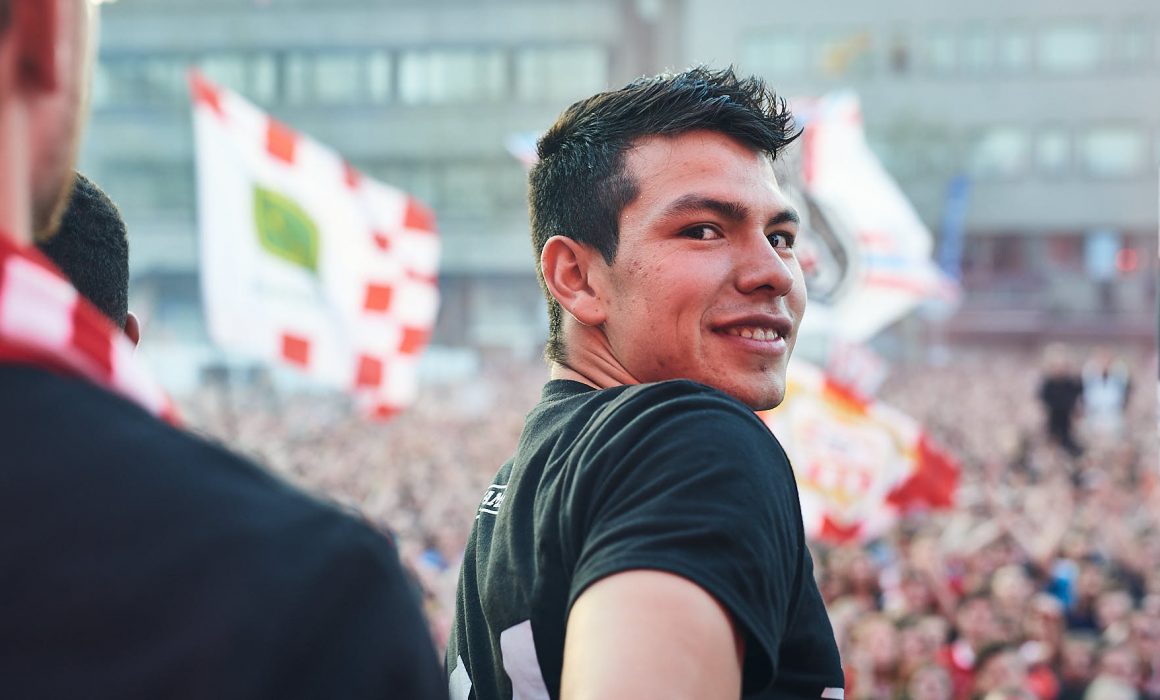 During PSV Eindhoven’s title celebrations this year, the club commissioned me to shoot behind the scenes photos. The result is a unique series of images documenting the side of this event you normally don’t get to see.

A bit of context: PSV played their rivals Ajax on Sunday a few weeks ago. If they managed to win that game, they’d be the champions of the Dutch Eredivisie. Being able to secure the title in a direct confrontation with their rivals was a unique opportunity. On Friday, I got a call from my contact at the club. She asked me to be on standby for Monday, to shoot a series of behind the scenes images. Of course this all depended on whether or not the team actually managed to win the match.

Be sure to also check out this series of cinematic images shot during the historic PSV – Ajax game.

PSV managed to seal the deal with a 3-0 victory, meaning I had my work cut out for me. My goal was to document the celebrations at city hall from the players’ perspective and show the moments you don’t normally get to see. The video below paints a picture for what the celebrations look like:

Fans are all too familiar with what these scenes look like from the front, watching from the crowd. My goal was to instead simply capture the action from the back, and focus on small moments that are illustrative of the team spirit and sheer exhilaration associated with this event.

Chapter 1: arrival on the platte kar

PSV traditionally makes a tour from their stadium to city hall on a so called platte kar. This is sort of an elevated flatbed. When the platte kar arrives at city hall, it is parked at a closed off area, where players and staff exit the vehicle through a ladder. They are welcomed by media and city hall staff, including the mayor. After being welcomed and congratulated by the mayor, all players and staff are treated to a drink and mingle a bit. This all leads up to the traditional balcony scene, where the Eredivisie platter is shown to the crowd. The photos below show striker Luuk de Jong embracing his wife, sporting a cast on his hand. He severely tore the skin of part of his hand during the match. Also shown is Hirving Lozano’s daughter, who was fascinated with PSV’s mascot Phoxy. After the balcony scene, players and staff move down one floor and make their way onto a wider podium. They are called onto stage one by one, and cheered on by the crowd. I tried to steer clear of cliché images here and instead capture genuine expressions and cinematic moments, including the shot of legend Ruud van Nistelrooij enjoying himself quite a bit.

Hirving Lozano is an up and coming winger whom I’ve spent some time focusing on previously. Check out those images right here: one game with PSV Eindhoven’s Mexican superstar Hirving Lozano. Chapter 4: on to the next party

After the final celebrations on stage, the players and staff have drink with city hall staff and then make their way to busses that were awaiting them outside. These will take them back to the stadium, where yet another (private) party is lined up for them. The shots below actually each tell a tiny story.

The squad makes their way outside, where riot police are lined up. There had been some minor disturbances, including ‘supporters’ breaking down a barrier to access the closed-off square. No serious incidents happened, but police were they in full gear just in case. What I absolutely love in this photo is the police officer bottom left fist bumping one of the players. Another story here: this traffic warden wasn’t too shy, and outright tried to persuade Mexican superstar Hirving Lozano to stay at PSV Eindhoven for another year. In the back, icon of the club Paul van Kemenade could hardly disagree. This was quite an amusing moment: Maxi Romero is PSV’s newly acquired striker from Argentina. He’s been coping with a lingering injury and for this reason hasn’t been able to play a single minute the last months. This must be quite an agony for him, but he seemed to be getting along with the team just fine. Maxi boarded the third and last bus, which was for the moment without a driver. Fear not though, for this striker stepped up and then sat down. Thank god he couldn’t find the ignition, but the horn was tested and seemed to function just fine.
(Just for safety and to avoid any gossip: Maxi made no serious attempt to start or drive the bus, and was obviously just goofing around) Some of these photos were used in a special edition of the PSV club magazine. This assignment goes to show that this club really appreciates special content and in fact has made it their policy to try to produce unique content to serve fans. Teams have special access to their players that third party media do not have, and it is vital to leverage this access in order to appeal to fans.
Personally, I loved being granted the creative freedom to capture this event in my own style, and feel that this approach enables clubs to show something genuine, authentic and unique. It is this approach that I personally aim for, and I feel this could have a far more prominent position in marketing by clubs, teams and brands that sponsor athletes.