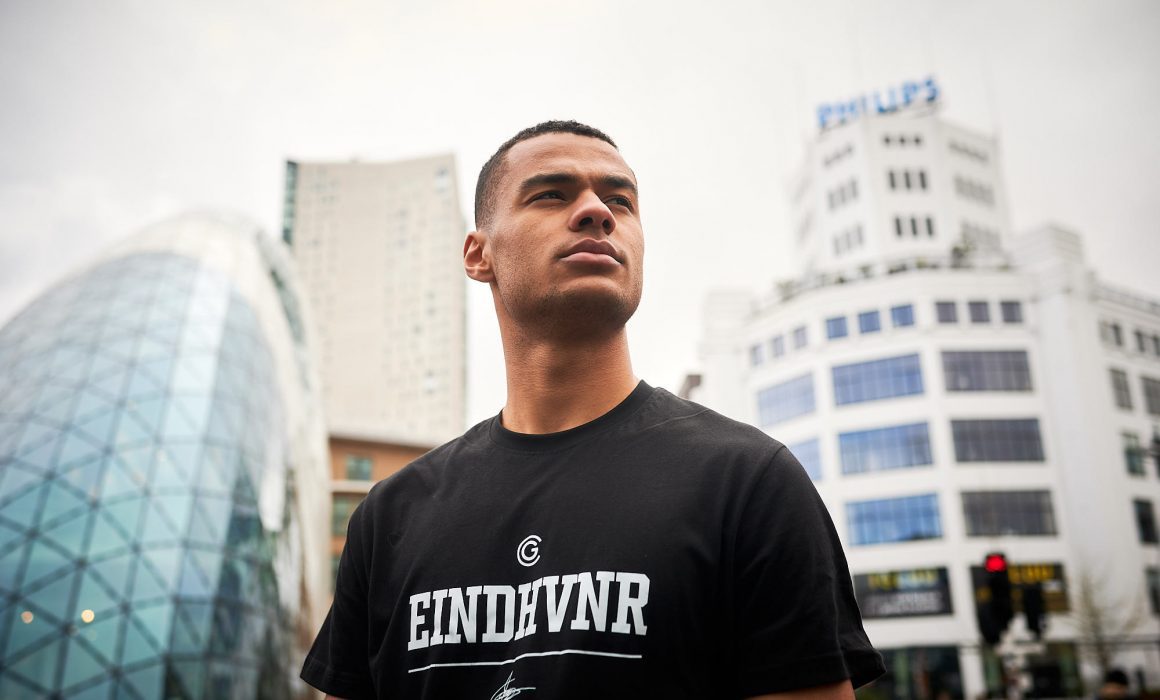 PSV Eindhoven football club’s local star Cody Gakpo got the chance to design his own line of apparel. To help launch these fresh threads, I shot the campaign images with Cody and his friends. This day had it all: sun, snow, iconic Eindhoven locations and three badass local boys.

Cody has been quite a bit of a fan favourite, because he was born and raised in Eindhoven. Combine that with his down to earth personality and work ethic, and you’ll understand why the fans like him.

When PSV and Cody Gakpo collaborated to design a special clothing line, it didn’t take them long to find a suitable name. Eindhvnr was born, a playful twist to Eindhovenaar, meaning someone from Eindhoven. While I wasn’t involved in the design process, I hear Cody was very interested and involved in creating the items.

Having some previous experience with Cody came in handy for this shoot. I’d worked him on this stomping grounds photo series. Cody trusted me to create some great results for his personal apparel project. It also allowed us to work efficiently as Cody often knew what I wanted in terms of posing.

Cody’s a pleasure to work with as well. He’s relaxed, kind and interested. The best thing about working with him is that he’s down to earth, open to ideas and trusts me at my craft.

In order to make for a somewhat more varied series of images, Cody had brought two of his friends. They would stand in for some of the photos. It was super nice working with this little crew, hitting locations throughout Eindhoven.

This was quite a challenging shoot in terms of time. The shoot called for shooting photo and video intermittently. We had chosen five locations in Eindhoven. Some showcased key locations of the city while others provided a more neutral backdrop.

Working with football players, you’re always working with a limited time slot. Players have busier days than some people think. After training sessions and tactical meetings, players do strength training and have interviews. This all amounts to a fairly normal nine to five job, plus they play matches during the weekend.

But I digress. The reality of Cody’s schedule meant we had about three hours to shoot photo + video at five locations. For some productions this would be impossible, but I like working fast, in a hit and run style. Having a good image in my head of what I want to shoot helps a lot. When I’m shooting, I know what backgrounds and light I want to work with. Being able to quickly create the image I saw in my head is hugely satisfying and helps me deliver a wide range of images to my clients.

There was an additional incentive to work fast: spring weather. The bad kind. We started out with some heavy rain, then gorgeous sunshine, but next thing we knew we were in the middle of a hail storm. Good thing many of our locations involved tunnels. To top it all off, we ended the day with snow. I was actually able to use this to create a moody image. Working in these conditions can be challenging but I love improvising, making it work and creating something in spite of the elements.

In the end we managed to hit all five locations. These ranged from the neighbourhood pitch where Cody first started playing, to the iconic Eindhoven central station. The station is shaped like a transistor radio in a nod to Philips, in case you didn’t know 🙂

We also managed to find some grungy backgrounds that fit with the urban image of the clothing. I’m always careful not to go too far embracing the graffiti and other cliches in locations like these. What I do love in such areas is the presence of tunnels. These make for amazingly soft and dramatic light that really accentuates the face.

Possibly my favourite spot was right downtown, in front of the iconic Philips Lichttoren. The location is very recognisable and even somewhat of a cliche in photographing Eindhoven. Still, it was the perfect backdrop for Cody’s proud expression in this shot. It contains the exact feeling this campaign was meant to showcase: Eindhvnr.

The final images were used in a range of the club’s media outlets, both online and offline, to promote the launch of this clothing collection. The club website’s landing page featured the campaign, just like the onlnie and offline store.